One of Rigid’s most versatile, compact lighting solutions just got better with the D-SS, Dually Side Shooter LED cube.

Perfect for any application that requires a wide spread beam, including A-Pillars, Fog Lights, and motorcycle applications.

The D-SS cube incorporates the same powerful optics and legendary LED technology as Rigid’s popular D-Series lights but with the added benefit of additional LEDs aimed to the side for a much broader beam.

The D-SS fixtures boast up to 120-degrees of horizontal lighting coverage when used in pairs or when used in the single light applications.

The main forward-facing LEDs are the Driving optics giving the best beam available as a forward projecting beam.

The D-SS LED lights are sold in pairs with a left and right cube that offers forward projection combined with side projection from the Left and right mounted cube. Only Rigid provides a broad, powerful lighting solution in such a compact package.

Standard D2 Dually Drive vs the DSS Side Shooter in the Drive pattern. 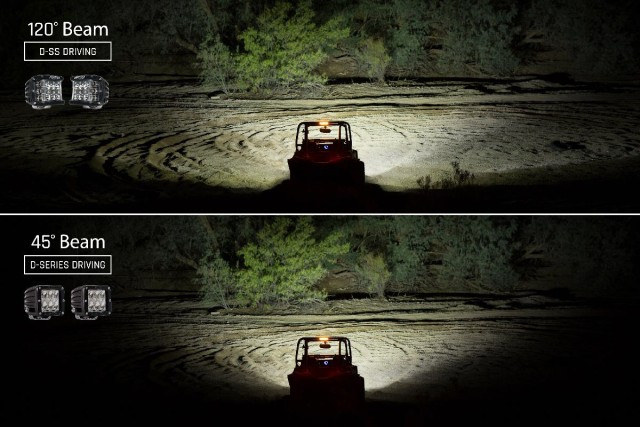